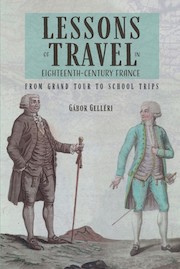 A study of the literature of the ’art of travel’ in eighteenth-century France, showing how consideration of who should travel and for what purpose provided an occasion for wider debate about the social status quo.

Early modern educational travel is usually associated with the Grand Tour : a young nobleman’s journey through the established highlights of Europe. Lessons of Travel presents how, in eighteenth-century France, this practice was heavily contested, and the idea of educational travel had far wider implications. Through the study of a huge range of both canonical and little-known sources discussing "the art of travel", from abbé Pluche’s educational best seller, The Spectacle of Nature, through Rousseau’s Émile to practical prospectuses for collective educational travel in the revolutionary period, Gelléri investigates what it meant to ’think about travels’ in eighteenth-century France. Consideration of who should travel and for what purpose, he argues, contributed to an international intellectual tradition but also provided a pretext for debate on the social status quo, including such issues as the place of the merchant class, the necessity for professional training, the uses of travel for young women and the education of a new generation of citizens of the Revolution.

GÁBOR GELLÉRI is Lecturer in French at Aberystwyth University.