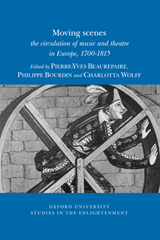 Moving Scenes. The circulation of music and theatre in Europe, 1700-1815

In eighteenth-century Europe, artistic production was characterised by significant geographical and cultural transfer. For innumerable musicians, composers, singers, actors, authors, dramatists and translators – and the works they produced – state borders were less important than style, genre and canon. Through a series of multinational case studies a team of authors examines the mechanisms and characteristics of cultural and artistic adaptability to demonstrate the complexity and flexibility of theatrical and musical exchanges during this period.

By exploring questions of national taste, so-called cultural appropriation and literary preference, contributors examine the influence of the French canon on the European stage – as well as its eventual rejection –, probe how and why musical and dramatic materials became such prized objects of exchange, and analyse the double processes of transmission and literary cross-breeding in translations and adaptations. Examining patterns of circulation in England, France, the Netherlands, Germany, Scandinavia, Russia, Bohemia, Austria, Italy and the United States, authors highlight :

I. National taste and cultural domination

Domestic versus foreign composers at the Opéra and the King’s Theatre in the eighteenth century, William Weber

French and German theatre troupes in Aachen and Trier during the French occupation (1794-1814), Fanny Platelle

II. Actors and patterns of circulation

The adaptation of French performance as shown in Favart’s correspondence, Flora Mele

Figaromania in Europe : the circulation and appropriation of Beaumarchais’s plays in the eighteenth century, Virginie Yvernault

Hiram at the playhouse : Masonic and theatrical travel in Europe, Pierre-Yves Beaurepaire

From the theatre box to the salon : music and theatre as elements of an aristocratic language in the Habsburg monarchy at the turn of the nineteenth century, Matthieu Magne

From archive boxes to cardboard screens : the diffusion of French theatre in Russia at the end of the eighteenth century, Nathalie Rizzoni

When dances circulated on paper : European dancing masters and the art of dancing ‘by characters and demonstrative figures’, Marie Glon

III. Translations and adaptations in revolution

Jean-Jacques Ampère and the translation of Artaxerxes, Julie Johnson

The creation of an amateur theatre in Mainz under the occupation of General Custine, Marita Gilli

The evolution of French adaptations of Richard Sheridan’s The School for scandal during the French Revolution and the First Empire, Valérie Maffre