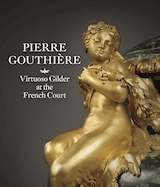 Pierre Gouthière : Virtuoso Gilder at the French Court celebrates the life of Pierre Gouthière (1732-1813), considered to be one of the best Parisian bronze chasers and gilders of the XVIIIth century. Gouthière became gilder to Louis XV in 1767, and is credited with inventing a new type of gilding that left a matte finish—dorure au mat—one of the hallmarks of his work. Although incredibly successful in his day, Gouthière died in relative obscurity and poverty ; unlike some of his contemporaries, his works never regained popularity after the French Revolution.

The inclusion of detailed entries and plates of forty works positively attributed to Gouthière, five essays by leading experts which examine Gouthière’s life, career, clientele, and gilding techniques, as well as examples of his work from US, Russian, and British collections, ensure that this beautiful volume is an invaluable new resource on Gouthière. Moreover, this is the first major study on Gouthière since 1920.