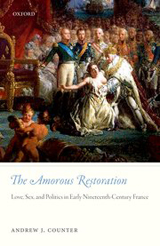 When Louis XVIII returned to the throne in 1814, and again in 1815, France embarked upon a period of uneasy cohabitation between the old and the new. The writers of the age, who included Chateaubriand, Stendhal, Balzac, and Mme de Duras, agreed that they lived at a historical turning point, a transitional moment whose outcome, though still uncertain, would transform the French way of life—beginning with the French way of love. The literary works of the Bourbon Restoration ceaselessly return to the themes of love, sex, and marriage, partly as vital cultural questions in their own right, but also as a means of critiquing the deficiencies of past regimes, negotiating the politics of the present, and imagining the shape of the political future. In the literature of the Restoration, love and politics become entwined in a mutually metaphorical embrace.

Andrew J. Counter is Associate Professor of French at the University of Oxford and a Fellow of New College. He has previously held positions at King’s College London and Gonville and Caius College, Cambridge, and studied French at Christ’s College, Cambridge. He works on all aspects of nineteenth-century French cultural life. His first book, Inheritance in Nineteenth-Century French Culture : Wealth, Knowledge, and the Family appeared with Legenda in 2010.