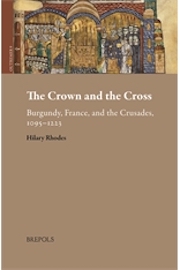 The Crown and the Cross examines the heretofore-unstudied role of the French province of Burgundy in the ‘traditional’ era of the crusades, from 1095–c.1220. Covering the First, Second, Third, Fourth, and Albigensian Crusades in detail, it focuses primarily on the Capetian dukes, a cadet branch of the French royal family, but uncovers substantial lay participation and some crusading traditions among Burgundian noble families as well. The book additionally uses the crusading institution to explore the development of the medieval French monarchy, and makes accessible a corpus of scholarship and documents that until now have mostly existed in French or Latin. It concludes that while piety and religion did play a central role in the experience of many everyday Burgundian crusaders, the greater political ramifications of the crusading project functioned in subtle and long-lasting ways, and had consequences for the entire institution, not just Burgundy or France. Of interest to scholars of the crusades, French history, and the formation of medieval Europe, The Crown and the Cross nuances, challenges, and expands our understanding of the intellectual genealogy of the crusades and their real-world consequences, fills a critical gap in the historiography, and poses a set of important conclusions and questions for continued study.

Hilary Rhodes received her PhD from the Institute for Medieval Studies at the University of Leeds in 2019. Her academic interests include crusade history, medieval social, gender, and queer history, medieval and modern historiography, and the function of the ‘imagined medieval’ in modern culture, and she has previously published six historical novels. She is presently an early career researcher, and is preparing to embark on a forthcoming second monograph from Medieval Institute Publications/Western Michigan University.

Table of Contents Chapter 1: Burgundy at the Dawn of the Crusades: Familial, Political, and Religious Histories
–  Geography, territory, and polity: from Carolingians to Capetians, 843–1032
–  Politics, family, and power in Burgundy, 1032–95
–  Cluny and the prehistory of the Crusades: 910–c.1050
–  Battling the Muslims and Cluniac Reform: Burgundians in Iberia, 1063–87