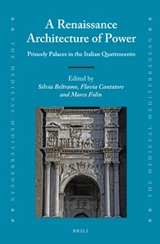 A Renaissance Architecture of Power. Princely Palaces in the Italian Quattrocento

The growth of princely states in early Renaissance Italy brought a thorough renewal to the old seats of power. One of the most conspicuous outcomes of this process was the building or rebuilding of new court palaces, erected as prestigious residences in accord with the new ‘classical’ principles of Renaissance architecture. The novelties, however, went far beyond architectural forms : they involved the reorganisation of courtly interiors and their functions, new uses for the buildings, and the relationship between the palaces and their surroundings. The whole urban setting was affected by these processes, and therefore the social, residential and political customs of its inhabitants. This is the focus of A Renaissance Architecture of Power, which aims to analyse from a comparative perspective the evolution of Italian court palaces in the Renaissance in their entirety. Contributors are Silvia Beltramo, Flavia Cantatore, Bianca de Divitiis, Emanuela Ferretti, Marco Folin, Giulio Girondi, Andrea Longhi, Marco Rosario Nobile, Aurora Scotti, Elena Svalduz, and Stefano Zaggia.