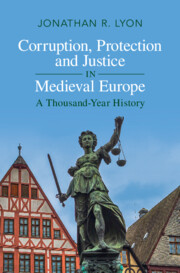 Corruption, Protection and Justice in Medieval Europe. A Thousand-Year History

What was an “advocate” (Latin : advocatus ; German : Vogt) in the Middle Ages ? What responsibilities came with the position and how did they change over time ? With this groundbreaking study, Jonathan R. Lyon challenges the standard narrative of a “medieval” Europe of feudalism and lordship being replaced by a “modern” Europe of government, bureaucracy and the state. By focusing on the position of advocate, he argues for continuity in corrupt practices of justice and protection between 750 and 1800. This book traces the development of the role of church advocate from the Carolingian period onward and explains why this position became associated with the violent abuse of power on churches’ estates. When other types of advocates became common in and around Germany after 1250, including territorial and urban advocates, they were not officeholders in developing bureaucracies. Instead, they used similar practices to church advocates to profit illicitly from their positions, which calls into question scholarly arguments about the decline of violent lordship and the rise of governmental accountability in European history.

The First “Medieval” Advocates Putting Down Roots in Ninth-Century Francia The « Aristocratization » of Post-Carolingian Advocacy Elite Competition at the Turn of the First Millennium The Limits of Church Reform Pigs and Sheep, Beer and Wine, Pennies and Pounds A History of Violence Weapons of the Not-so-Weak The Murder of Archbishop Engelbert Widening the Lens The Emperor as Vogt, ca. 1000–1500 From Lordship to Government ? Reframing the History of Violence Crossing the False Divide : Advocates after 1500 A Cultural History of the Rapacious Advocate, or : William Tell’s Revenge

Jonathan R. Lyon is Professor of History at the University of Chicago, where he specializes in the history of the Holy Roman Empire. He has previously held fellowships from the Humboldt Foundation and the Austrian Science Fund. He is the author of Princely Brothers and Sisters : The Sibling Bond in German Politics, 1100–1250 (2013), which won the 2017 John Nicholas Brown Prize from the Medieval Academy of America, and Noble Society : Five Lives from Twelfth-Century Germany (2017).