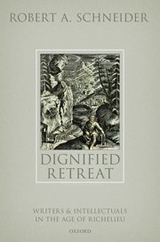 Dignified Retreat. Writers and Intellectuals in the Age of Richelieu

Robert A. Schneider, Dignified Retreat. Writers and Intellectuals in the Age of Richelieu, OUP, 2019.

Dignified Retreat is a panoramic study of the vibrant literary and intellectual culture that emerged in early seventeenth-century France following the devastating Wars of Religion. This was a period that not only witnessed the recovery of the country following these wars, and the emergence of a strong, ’absolutist’ monarchy under the Bourbons, but also the rise and refinement of the French language and the development of a literary culture that would soon be known as French classicism. Casting his net over a wide range of writers and intellectuals, Robert A. Schneider has assembled a roster of more than 100 men and women of letters, those constituting what he calls the ’generation of 1630’. While diverse, and indeed divided between those who hewed to traditional humanism and others more attuned to ’modern’ linguistic and literary developments, this cohort largely shared a commitment to a cultural renewal of France, its rise to prominence in the geopolitical arena of Europe, and the emergence of a strong centralized monarchy. They depended on both the traditional aristocracy and the king’s powerful minister, Cardinal Richelieu. But despite this dependency, these writers and intellectuals maintained a degree of independence and, more significantly, were the prime movers in crucial cultural developments that are too often identified with royal initiatives. For example, the author demonstrates that the Academie francaise, founded in 1635 by Richelieu, often considered formative in French cultural history, was actually more the result of the creative initiatives of these men of letters, which the savvy Cardinal only managed to co-opt and turn to the purposes of the crown.