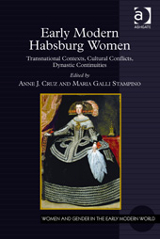 As the first comprehensive volume devoted entirely to women of both the Spanish and Austrian Habsburg royal dynasties spanning the sixteenth and the seventeenth centuries, this interdisciplinary collection illuminates their complex and often contradictory political functions and their interrelations across early modern national borders.

The essays in this volume investigate the lives of six Habsburg women who, as queens consort and queen regent, duchesses, a vicereine, and a nun, left an indelible mark on the diplomatic and cultural map of early modern Europe. Contributors examine the national and transnational impact of these notable women through their biographies, and explore how they transferred their cultural, religious, and political traditions as the women moved from one court to another.

Through archival documents, pictorial and historical accounts, literature, and correspondence, as well as cultural artifacts such as paintings, jewelry, and garments, this volume brings to light the impact of Habsburg women in the broader historical, political, and cultural contexts. The essays fill a scholarly need by covering various phases of the lives of early modern royal women, who often struggled to sustain their family loyalty while at the service of a foreign court, even when protecting and preparing their heirs for rule at that same court.