Accueil / Actualités / Parutions / Liturgy and Sequences of the Sainte-Chapelle. (...) 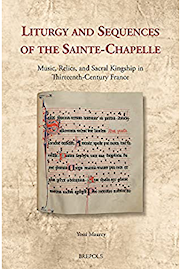 Liturgy and Sequences of the Sainte-Chapelle. Music, Relics, and Sacral Kingship in Thirteenth-Century France

The book revolves around some of the most important relics of Christendom — chief among them the Crown of Thorns — and the ways in which they became, effectively, personal objects of devotion, notwithstanding their ostensibly universal appeal. It was France that laid claim to the Passion and other relics in the middle of the thirteenth century in a campaign that involved the construction of a new magnificent chapel — the Sainte-Chapelle — designed specifically to display the relics, and the composition of new liturgies to celebrate and focus attention on them. As inert objects, relics could not accomplish much without being ‘activated’ one way or the other, whether in prose, poetry, paintings, statues, or in music. It is these modes of activation that endowed the substance of relics with identity and meaning that made them so powerful and effective. The liturgies studied in this book were some of the most critical mechanisms of activation ; they enabled the power of the Sainte-Chapelle relics, articulated the nature of that power, and proclaimed it far and wide. Nowhere is this more evident than in the sequences memorializing these relics, which were chiefly cultivated and championed at the Sainte-Chapelle. This book examines these sequences, and the ways in which they give prominence to the underlying agenda of the French monarchy by promoting and naturalizing the notion of sacral kingship, rooted in biblical kingship.

IntroductionPart I. The Crown of Thorns Historia susceptionis coronae spinaeThe Liturgy for the Crown of Thorns Sequences for 11 August and its OctaveEpilogue : Dyadema salutare – A Dominican Addition and its ImportConclusionsPart II. The Reception of Relics