Accueil / Actualités / Parutions / Medici Women : The Making of a Dynasty in (...) 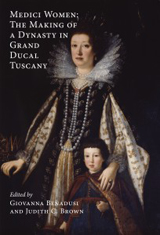 Medici Women : The Making of a Dynasty in Grand Ducal Tuscany

The Medici grand ducal family and the court it created in the sixteenth and seventeenth centuries have long fascinated historians and the general public. Until recently, however, the women who married into the family or were born into it were relegated to the margins of history. Though long acknowledged as wives and mothers who contributed to the propagation of the Medici line, their function in the creation of the court, in shaping its culture, in contributing to the transformation of the state from a city-state republic to a principality, and in establishing the Medici’s place in the European network of dynastic rulers tended to be either ignored or maligned. It is only in the last decade or so that scholars have begun to reassess their roles and achievements. The aim of this book is to advance that reassessment.

The Editors Giovanna Benadusi is Professor of History at the University of South Florida. Her research brings together the study of women, gender, class, and the law in grand ducal Tuscany from the sixteenth to the early eighteenth centuries. She is currently completing a book on “The Law and the People : Legal Culture and Local Knowledge in Seventeenth-Century Tuscany.” Judith C. Brown is Professor Emeritus of History and a former Vice-President for Academic Affairs and Provost at Wesleyan University. She has written extensively on gender and the economy in Renaissance Italy and is best known for her In the Shadow of Florence : Provincial Society in Renaissance Pescia (1982) and Immodest Acts : The Life of a Lesbian Nun in Renaissance Italy (1986).