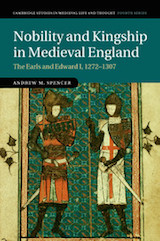 Nobility and Kingship in Medieval England

Nobility and Kingship in Medieval England is a major new account of the relationship between Edward I and his earls, and of the role of the English nobility in thirteenth-century governance. Re-evaluating crown-noble relations of the period, Spencer challenges traditional interpretations of Edward’s reign, showing that his reputed masterfulness has been overplayed and that his kingship was far subtler, and therefore more effective, than this stereotype would suggest. Drawing from key earldoms such as Lincoln, Lancaster, Cornwall and Warenne, the book reveals how nobles created local followings and exercised power at a local level as well as surveying the political, governmental, social and military lives of the earls, prompting us to rethink our perception of their position in thirteenth-century politics. Adopting a powerful revisionist perspective, Spencer presents a major new statement about thirteenth-century England ; one which will transform our understanding of politics and kingship in the period.

Andrew M. Spencer was educated at King’s College London, where he won the Derby–Bryce Prize for History, and Peterhouse, Cambridge. He is currently a British Academy Postdoctoral Research Fellow at the University of Cambridge and a Research Fellow and Director of Studies in History at Corpus Christi College, Cambridge.