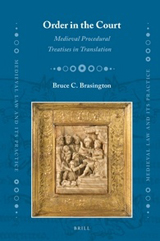 Order in the Court : Medieval Procedural Treatises in Translation

In Order in the Court, Brasington translates and comments upon the earliest medieval treatises on ecclesiastical legal procedure. Beginning with the eleventh-century “Marturi Case,” the first citation of the Digest in court since late antiquity and the jurist Bulgarus’ letter to Haimeric, the papal chancellor, we witness the evolution of Roman-law procedure in Italy. The study then focusses on Anglo-Norman works, all from the second half of the twelfth century. The De edendo, the Practica legum of Bishop William of Longchamp, and the Ordo Bambergensis blend Roman and canon law to guide the judge, advocate, and litigant in court. These reveal the study and practice of the learned law during the turbulent “Age of Becket” and its aftermath.