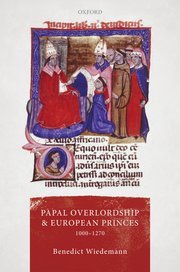 Papal Overlordship and European Princes, 1000-1270 offers a new perspective on the political history of the central Middle Ages by focusing on the alliances between popes and rulers who claimed a special relationship with the successor of St Peter. Rather than seeing these relationships as attempts by the popes to assert their lordship and monarchy over the entire world, as many past narratives have, this study asks what rulers got out of these relationships, what they meant, and how they were constructed. Papal government – in fact much pre-modern government in general – was based around replying to petitions. Thus, rulers and subjects, by entering into a relationship with the pope, were able to petition Rome and have their requests approved and given the sanction of papal authority. Papal power was enlisted in the causes of petitioners.

All of these relationships – between the popes and the kings of England, Aragon, Sicily, Hungary, Portugal, and a myriad of further polities – have at one time or another been called ‘feudal’, a word that explains little or nothing about the nature and expectations of the alliance. The second strand of this study examines how these relationships were constructed and how words and concepts circulated. Eventually terms like ‘fief’ and ‘vassal’, and ideas about deposition of vassal-kings, were introduced into the political discourse around papal authority over ‘their’ kings. It always remained the case, however, that rulers sought out papal overlordship because of the opportunity it gave them to adopt and adapt papal power for their own purposes.

2 : Homage : Popes and Homage in the Twelfth Century

4 : Vassalage : The Birth of Feudal Overlordship in Sicily, England, Man and Aragon in the early Thirteenth Century

5 : State-Building : The Prince-Bishops of Maguelone and Papal Overlordship in Southern France in the Thirteenth Century

6 : Wardship : Theory and Practice of Papal Protection for Underage Rulers in the Thirteenth Century

Benedict Wiedemann is an Early Career Research Fellow at Fitzwilliam College, Cambridge. He was born in Bristol and received his PhD, postgraduate, and undergraduate degrees from University College London. He taught briefly at the University of Kent before coming to Cambridge in 2018.