Accueil / Actualités / Parutions / The Daughters of Henry II and Eleanor of (...) 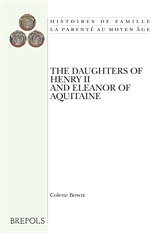 The Daughters of Henry II and Eleanor of Aquitaine

The three daughters of Henry II and Eleanor of Aquitaine all undertook exogamous marriages which cemented dynastic alliances and furthered the political and diplomatic ambitions of their parents and their spouses. It might be expected that the choices made by Matilda, Leonor, and Joanna with regard to religious patronage and dynastic commemoration would follow the customs and patterns of their marital families, yet in many cases these choices appear to have been strongly influenced by ties to their natal family. Their involvement in the burgeoning cult of Thomas Becket, their patronage of Fontevrault Abbey, the names they gave to their children, and the ways in which they were buried, suggests that all three women were able, to varying degrees, to transplant Angevin family customs to their marital lands.

By examining the childhoods, marriages, and programmes of patronage and commemoration of Matilda, Leonor and Joanna, this monograph compares and contrasts the experiences of three high-profile twelfth-century royal women, and advances the hypothesis that there may have been stronger emotional ties within the Angevin dynasty than has previously been allowed for.

Colette Bowie received her doctorate in 2011 from the University of Glasgow, where she currently holds affiliate status in the School of History. She has presented research at a number of international conferences, and is a founding member of the recently-established “The Angevin World” research project. “The Daughters of Henry II and Eleanor of Aquitaine” is her first monograph.