Accueil / Actualités / Parutions / The Library of the Dukes of Burgundy 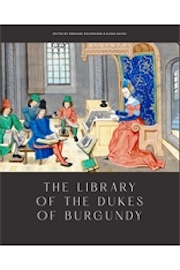 The Library of the Dukes of Burgundy

Very richly illustrated, this volume re-frames this exceptional library within its political, economic, historical and artistic context, examining closely both scholarly literature and more than sixty manuscripts considered to be the jewels of the Library.

Formed under Philip the Bold and passed down to his successors, John the Fearless and Philip the Good, the Library of the Dukes of Burgundy comprised no less than nine hundred manuscripts copied and illuminated by the greatest artists of the Middle Ages by the time of Charles the Bold. This extraordinary and unique library included essential texts of medieval literature such as the works of Christine de Pizan, the Roman de la Rose by Jean de Meung and Guillaume de Lorris, the History of Charles Martel, as well as the Ethics and Politics of Aristotle. It was one of the largest collections of books of its time alongside those of the King of France Charles V, the Duke of Berry, the Medici and the papacy.

The two hundred and eighty manuscripts of the collection preserved today in the Royal Library of Belgium cover all fields of medieval thought : literature, ancient history, sciences, morals, religion philosophy, but also law, poetry and chivalric romance. The oldest of these works date back to the fourteenth century while the most recent date from the end of the feudal period. Many of them were transcribed at the express request of the dukes by renowned copyists such as Jean Miélot, Jean Wauquelin, and David Aubert. Many of these codices are absolute masterpieces of the French or Flemish miniature and have been illuminated by Willem Vrelant, Loyset Liédet, Jean le Tavernier, Philippe de Mazerolles, Simon Marmion, and Liévin Van Lathem, miniaturists whose fame and talent competed with Flemish Primitives such as Jan Van Eyck, Rogier Van der Weyden or Hans Memling. In the unanimous opinion of researchers, manuscripts that belong to the collection such as the Chronicles of Hainault by Jacques de Guise, the Hours of the Duke of Berry, the Psalter of Peterborough or the Cronic and Conquest of Charlemagne, are among the fifty most prestigious manuscripts in the world.

Bernard Bousmanne, PhD in Medieval History, has been director of the Manuscripts Department since 1997. Cocurator of KBR museum and formerly President of the Centre International de Codicologie, he has published numerous monographs and essays on medieval art.

Elena Savini holds degrees from the University of Bologna, the Université de Haute-Alsace (Mulhouse) and the Université libre de Bruxelles, and is currently a member of the Manuscripts Department of the KBR. A specialist in French literature of the nineteenth and twentieth centuries as well as medieval manuscripts, she is also co-curator of KBR museum.