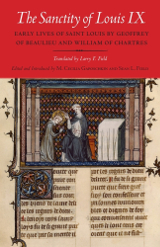 The Sanctity of Louis IX. Early Lives of Saint Louis by Geoffrey of Beaulieu and William of Chartres

Louis IX of France reigned as king from 1226 to 1270 and was widely considered an exemplary Christian ruler, renowned for his piety, justice, and charity toward the poor. After his death on crusade, he was proclaimed a saint in 1297, and today Saint Louis is regarded as one of the central figures of early French history and the High Middle Ages. In The Sanctity of Louis IX, Larry F. Field offers the first English-language translations of two of the earliest and most important accounts of the king’s life : one composed by Geoffrey of Beaulieu, the king’s long-time Dominican confessor, and the other by William of Chartres, a secular clerk in Louis’s household who eventually joined the Dominican Order himself. Written shortly after Louis’s death, these accounts are rich with details and firsthand observations absent from other works, most notably Jean of Joinville’s well-known narrative

The introduction by M. Cecilia Gaposchkin and Sean L. Field provides background information on Louis IX and his two biographers, analysis of the historical context of the 1270s, and a thematic introduction to the texts. An appendix traces their manuscript and early printing histories. The Sanctity of Louis IX also features translations of Boniface VIII’s bull canonizing Louis and of three shorter letters associated with the earliest push for his canonization. It also contains the most detailed analysis of these texts, their authors, and their manuscript traditions currently available.