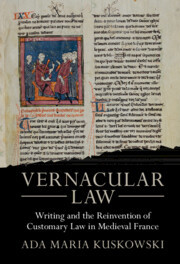 Vernacular Law. Writing and the Reinvention of Customary Law in Medieval France

Custom was fundamental to medieval legal practice. Whether in a property dispute or a trial for murder, the aggrieved and accused would go to lay court where cases were resolved according to custom. What custom meant, however, went through a radical shift in the medieval period. Between the twelfth and thirteenth centuries, custom went from being a largely oral and performed practice to one that was also conceptualized in writing. Based on French lawbooks known as coutumiers, Ada Maria Kuskowski traces the repercussions this transformation – in the form of custom from unwritten to written and in the language of law from elite Latin to common vernacular – had on the cultural world of law. Vernacular Law offers a new understanding of the formation of a new field of knowledge : authors combined ideas, experience and critical thought to write lawbooks that made disparate customs into the field known as customary law.

Introduction : vernacular writing and the transformation of customary law in Medieval France

Part I. Written Custom and the Formation of Vernacular Law :

What is custom ? Concept and literary practice Composing customary law as a vernacular law Writing a ‘ius non scriptum’ : writtenness, memory and change

Ada Maria Kuskowski is Assistant Professor of History at the University of Pennsylvania. Her interdisciplinary approach weaves together history, law and literary approaches to understand how legal cultures developed in Europe. This is her first book