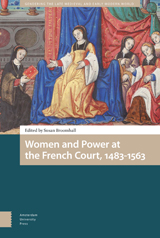 Women and Power at the French Court, 1483—1563 explores the ways in which a range of women “ as consorts, regents, mistresses, factional power players, attendants at court, or as objects of courtly patronage “ wielded power in order to advance individual, familial, and factional agendas at the early sixteenth-century French court. Spring-boarding from the burgeoning scholarship of gender, the political, and power in early modern Europe, the collection provides a perspective from the French court, from the reigns of Charles VIII to Henri II, a time when the French court was a renowned center of culture and at which women played important roles. Crossdisciplinary in its perspectives, these essays by historians, art and literary scholars investigate the dynamic operations of gendered power in political acts, recognized status as queens and regents, ritualized behaviors such as gift-giving, educational coteries, and through social networking, literary and artistic patronage, female authorship, and epistolary strategies.

In the Orbit of the King. Women, Power, and Authority at the French Court, 1483–1563 Susan Broomhall

4. Literary Lessons in Queenship and Power. Mary Tudor Brandon and the Authority of the Ambassador-Queen Erin A. Sadlack 5. Claude de France and the Spaces of Agency of a Marginalized Queen. Kathleen Wilson-Chevalier 6. Portraits of Eleanor of Austria. From Invisible to Inimitable French Queen Consort Lisa Mansfield

7. Family Female Networking in Early Sixteenth-Century France. The Power of Text and Image Cynthia J. Brown 8. The Power of Reputation and Skills according to Anne de Graville. The Rondeaux and the Denunciation of Slander Mawy Bouchard 9. Imagination and Influence The Creative Powers of Marguerite de Navarre at Work at Court and in the World Jonathan A. Reid 10. Power through Print. The Works of Hélisenne de Crenne Pollie Bromilow

11. The Life and After-Life of a Royal Mistress. Anne de Pisseleu, Duchess of Étampes David Potter 12. ‘The King and I’. Rhetorics of Power in the Letters of Diane de Poitiers Susan Broomhall 13. Catherine de Médicis Tested by the Virtue of Charity (1533–1559). Discourse and Metadiscourse Denis Crouzet