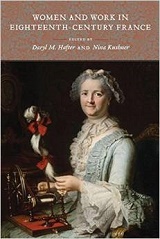 Women and Work in Eighteenth-Century France

In the eighteenth century, French women were active in a wide range of employments from printmaking to running wholesale businesses although social and legal structures frequently limited their capacity to work independently. The contributors to Women and Work in Eighteenth-Century France reveal how women at all levels of society negotiated these structures with determination and ingenuity in order to provide for themselves and their families.

Recent historiography on women and work in eighteenth-century France has focused on the model of the family economy, in which women’s work existed as part of the communal effort to keep the family afloat, usually in support of the patriarch’s occupation. The ten essays in this volume offer case studies that complicate the conventional model : wives of ship captains managed family businesses in their husbands extended absences ; high-end prostitutes managed their own households ; female weavers, tailors, and merchants increasingly appeared on eighteenth-century tax rolls and guild membership lists ; and female members of the nobility possessed and wielded the same legal power as their male counterparts.

Examining female workers within and outside of the context of family, Women and Work in Eighteenth-Century France challenges current scholarly assumptions about gender and labor. This stimulating and important collection of essays broadens our understanding of the diversity, vitality, and crucial importance of women s work in the eighteenth-century economy.